Have a look at the link above as to why I'm having a laugh about it.

In a nutshell, Sony produced a movie - Zero Dark Thirty - which details the capture and death of Osama bin Laden.

The members of the Senate Intelligence committee - Dianne Feinstein, Carl Levin and John McCain - insisted on Wednesday that Sony and its president and CEO, Michael Lynton, had an obligation to alter the movie and make clear that torture in the hunt for bin Laden was fiction and not based on fact.

In their letter to Sony, the politicians said the "use of torture in the fight against terrorism did severe damage to America's values and standing that cannot be justified or expunged. It remains a stain on our national conscience. We cannot afford to go back to these dark times, and with the release of Zero Dark Thirty, the filmmakers and your production studio are perpetuating the myth that torture is effective. You have a social and moral obligation to get the facts right."

Director Kathryn Bigelow and screenwriter Mark Boal said in a statement from Sony that they depicted "a variety of controversial practices and intelligence methods that were used in the name of finding bin Laden".

Bigelow and Boal, who won Oscars for The Hurt Locker, said the new film showed that no single method was responsible in the successful manhunt for bin Laden, and no single scene in isolation captures the total effort the movie dramatises.

How can the American people ever trust what their politicians say?

Wikileaks exposed a lot about the American Government, and here we have politicians exclaiming how virtuous the government are. The government want to disown the use of torture, which we all know happened quite extensively. Why would they want to disown it? Because it makes them look bad? Well tough luck. If you didn't treat prisoners of war in such disgusting conditions as Guantanamo Bay and use torture, there would be nothing to worry about. Geneva Convention for the fair treatment of prisoners? haha, the Yanks have never heard of that (unless it's an American prisoner held somewhere, then it's a different matter).

Good on you Sony for having the balls to stick with it.

ps: Sections marked in blue were taken from the AdelaideNow website
Posted by Get Real at Wednesday, December 19, 2012 No comments: Links to this post

America's 2nd Amendment (The right to bear arms) .. time for a change in the constitution. No more Sandy Hook killings 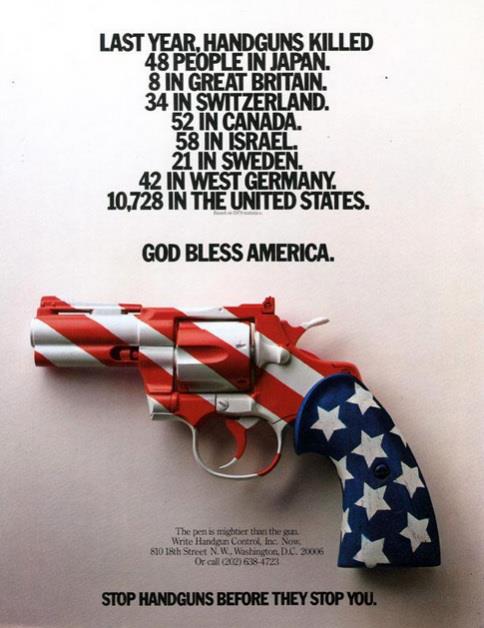 I can't vouch for the above figures, but I wouldn't be surprised.

If Obama has any balls he'll start the ball rolling to have this ridiculous 'right' struck from the constitution.

Pretty much, the world is sick of it. Time for Americans to say... "we've lost all control of firearms, and we're starting to look like a bunch of sicko's in the eyes of the world".

Yeah, I know people will whinge and carry on that it's PEOPLE that kill, not the gun (or knife), but at the very least, it's time for some serious soul searching and the instigation of proper background checks and/or hugely reducing the availability of high powered "war type" guns allowed to be owned.

There is absolutely no reason whatsoever for the 'average' person to have semi automatic or fully automatic weapons available to them. I see no reason for nothing more than a 9mm pistol to be available to protect oneself or ones home.

Have a huge buyback and if nothing else, get rid of millions of guns on the streets. I know lots of crims wont hand their guns back, but at least getting rid of a few million is a start.

But the yanks won't do it. They are all the same. Power hungry and driven by greed, stupidity and their damn RIGHTS.

Obama doesn't have the balls to take on the NRA, and what does he care, he'll be 'retired' in a little under four years.

And what's worse is the media play on this hysteria and sensationalise everything so much so, that the next psychotic criminal that goes on a killing spree has to compete with previous mass murderers and see if he can kill even more innocent people.

Meanwhile, the Americans will wring their hands, the NRA will be strangely silent, and we'll wait for the next killings, more anguish and promises that will amount to nothing, and then wait again. The vicious circle will continue.

Get Real
Posted by Get Real at Monday, December 17, 2012 No comments: Links to this post

America, The Country Guilty of War Crimes in Iraq. Private Bradley Manning & Wikileaks simply showed the world how senseless and irresponsible the American government are

Once again, I view the footage of an American Apache helicopter pilot and his co-murderers gunning down innocent people in Iraq.

This WAR CRIME was exposed by Private Bradley Manning and Wikileaks back in 2007, and the devastation of that war crime carries on.

In essence, one or two of the group were carrying weapons... wouldn't you if you were being attacked?

The Apache helicopter lied to his commanding officers to seek permission to shoot. Naturally, he got that permission and shot innocent persons.

As far as I'm concerned (and many others around the world and America), Private Bradley Manning is innocent, as he was simply bringing to the worlds attention the fact that America are commiting war crimes.. and getting away with it. Why isn't America being held accountable for these war crimes?

Wikileaks simply acted as a conduit for that information to become public. The American government hate Wikileaks, Bradley Manning and Julian Assange because they have exposed the yankee government for what they really are!

I'm glad to see that America is slipping down the superpower ranks.. soon to be outdone by China, and other countries.

Just remember, what goes around comes around.

Get Real
Posted by Get Real at Sunday, December 02, 2012 No comments: Links to this post